Mr. Lewis was born and raised in Virginia. His fine art career began after moving to Arizona in the 1990s. He has also lived briefly in Wales, New York City, Maine and Namibia, but for the last two decades has called Oregon home, where he continues to obsess over the real vs. the imagined and the mystery of the ordinary. 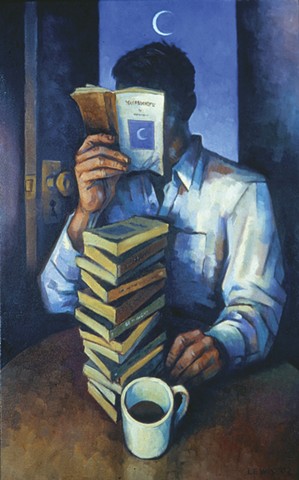 My work is driven largely by narrative and metaphor to tell both true stories and tall tales about what is real, what is imagined and the mystery inherent in everything. Both narrative and metaphor are among the oldest tools of art and still essential to finding new meaning in, and new ways of seeing the world. For me, that world is largely the American West.

In my paintings, the landscape becomes a stage set for an enigmatic tale, with dramatic lighting and unexpected props. For me, the creative process is a never ending attempt to tell a story, usually starting somewhere in the middle with no idea how it ends. The props (the chair, the canoe, the boulder and so on) become metaphors that can shift their meaning depending on the context, and not just the context within the painting, but also within the viewer’s experience.

The empty chair, for example, has been a recurring motif in my work for the better part of a decade. In one sense, it invites you into the scene, because it suggests the human presence without depicting an actual figure. After all, a simple wooden chair can be anyone’s. It also conveys, for me at any rate, a comforting kind of solitude. However, when the pandemic forced isolation upon us, that sense of solitude took on a new and more somber implication.

Metaphors and stories, even landscapes, are like that. Their meaning can change over time, as our own experience changes. Because art is not just a thing you observe. It’s an interaction. If it’s to have any meaning at all, you have to meet it halfway.